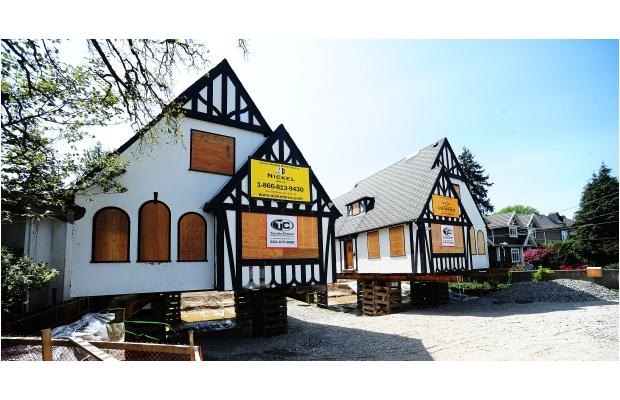 Two Tudor-style houses known as the Two Dorothies were recently saved from demolition by being moved, but may be stripped down to the studs because they are going to be strata titled, that kicks in provisions that would require them to be rainscreened and seismically upgraded.  Photograph by: Nick Procaylo, Vancouver Sun

Demolitions of heritage character houses are the subject of the City of Vancouver’s heritage action plan going to city council this week. Although it is a step in the right direction, concerns remain.

The city’s report is in three parts: (a) Steps to enhance protection of First Shaughnessy and pre-1940s character houses; (b) Encouraging reuse and recycling of construction waste from pre-1940 homes and construction and demolition-waste diversion strategy; (c) Vancouver heritage register annual update

A few of the proposed actions may help discourage a repeat of the more than 1,000 demolitions in 2013, however, many of the interim actions may not be effective, and most of the long-term solutions will not happen until 2015, after the next election in November 2014.

The demolition of character houses undermines the city’s green initiatives, affordability objectives, and neighbourhood character. It is a result of current policy, some of which is recent.

Contrary to Vancouver Heritage Commission recommendations, laneway housing was approved for new house development outright rather than being reserved as an incentive to retain existing character homes. Then, further, the city added increases in height and density to the zoning. In essence, this has created a bonus to demolish and is responsible for much of the recent increase in demolitions.

The current report to council attempts to counter this pressure to demolish character houses. However, the most glaring omission is the report fails to deal with the building code.

The current building code is biased toward new construction and adds significant impediments for renovation of existing character buildings. The city, through its powers under the Vancouver Charter, should remove these impediments immediately so retention and renovation of character buildings is more viable and affordable. Home owners should not be forced into upgrades that increase the financial burden of maintaining or renovating a character house.

Many of these buildings have stood for a hundred years without problems. Yet the building code requires a character house to upgrade to full building code compliance when it undergoes a substantial renovation, or is moved even a few inches off its existing location on site, or to another lot.

The current code is based on new construction technology, not the materials and craftsmanship of a different era. The rules often require the removal of the very character defining features that make the building worth saving and result in little of the original house remaining when the renovation is complete.

A recent example are the code upgrades triggered by moving of the twin Tudor-style homes known as the Two Dorothies, which were moved two blocks in Kerrisdale. Among other upgrades, these buildings may be required to be rain-screened.

Rain-screening of a character house would require the entire outside finishes to be removed, including siding, stucco, trims, windows and doors. Then it would need to be wrapped with building paper and strapped, allowing air flow, even though most character building envelopes already breathe because of how they were originally built. The outside finishes would then need to be reassembled, but generally are replaced because the dimensions will have been changed and materials damaged in their removal. This destroys the building’s character and is very unnecessarily expensive. Rain-screening should not be required for character buildings.

The insulation requirements can also be unreasonable. To meet code, a character building’s exterior walls may need to be changed from 2x4s to 2x6s to allow for thicker insulation. (Yet in new construction the city allows glass curtain-wall with concrete construction that has almost no thermal value.) To change to 2x6s, the interior trims, plaster, windows and doors would be removed, ruining the interior character. Again, this should not be required.

The city proposals in the report to council are geared toward character houses that are defined as being built in pre-1940 rather than pre-1940s. The difference may appear small but it means any buildings from 1940-49 would not be included.

“In the 1940s the city limited the size of new houses to conserve scarce resources needed elsewhere. If there ever was a time when conservation of scarce resources was again necessary, it is now,” Jamieson writes.

Jamieson also reports a motion was passed at the recent Upper Kitsilano Residents Association annual general meeting, (with only one person opposed), that the city find ways to stop the demolition of character homes in their area.

Caroline Adderson and the Vancouver Character House Network have about 4,000 signatures on a petition to save character houses from demolition and over 4,400 likes on Adderson’s Facebook page called Vancouver Vanishes, where she has been chronicling the demolitions for over a year. There is strong public support for dealing with this issue.

The VCHN has sent a letter to council that includes a number of recommendations. The letter emphasizes that deconstruction is not heritage preservation, but waste management. More should be done to make keeping and renovating these homes easier, making demolition less attractive while being fair for existing owners.

The city report also includes policy that gives of the director of planning new discretionary power to make retention more advantageous. This discretionary power includes how development applications are to be managed, relaxations on how zoning regulations are to be applied, adding 10-per-cent density bonuses, and that “character merit buildings” on “under-utilized lots (a small building on a large lot)” may be demolished. The VCHN raised concerns that checks and balances be put in place so the public is involved, especially those in adjacent properties who are most affected by a decision of the director of planning.

The public needs to be generally more involved in how the heritage action plan is implemented and policies created.

The city is also considering allowing strata in RS zones, but the Heritage Commission previously recommended that strata only be allowed in these zones for heritage projects that involve heritage revitalization agreements under which a heritage asset is protected by a charge on title. This way the existing zoning that allows three units (the main house, secondary suite and a laneway house) will continue to be either for family use or rental, consistent with city policy to protect and increase rentals.

Wherever existing policy allows strata, the city has been going to extreme lengths to encourage building of non-strata rentals. It would be going in the wrong direction if the city would take what is now a non-strata rental zoning and make it strata, thereby reducing rentals.

“Accessory units such as rented basement suites or garden suites improve affordability for owners through the rental revenue generated by the suite while adding to the over-all supply of ground-oriented units in existing neighbourhoods. This provides a supply of geographically dispersed rental housing, which helps maintain the income and social diversity of existing neighbourhoods, and makes effective use of limited land. They are often more affordable, with average market rents for rented basement suites about 20 per cent below the average market rent for a purpose-built rental housing unit and almost half the average market rent for a rented condominium apartment unit.”

Most of the secondary suites are located in RS zones and if zoning changes include strata it could result in a huge loss of affordable rentals and displacement of vulnerable people. Since the rents of these units are about half of those in rented condominiums, this stock would be almost impossible to replace without subsidies.

Any changes to encourage the retention of character houses must be done carefully and with the full involvement of the community in a collaborative process. There is much at stake.

The heritage action plan report confirms there are 100 tons of materials in the average 2200-square-foot character house. The best way to recycle this is through the adaptive reuse of character buildings renovated on site. If that is not possible, the next best way is to recycle the whole intact house by moving it. In both of these cases, amendments in the building codes are required to make it financially viable.

Currently, the imminent demolition of the Heritage A Legg residence, a grand arts-and-crafts mansion and one of the last three left in the West End could have been prevented if the city had implemented the existing tower separation design guidelines. Part of the heritage plan should be to ensure existing zoning policies are respected and used to encourage retention of heritage as a priority. Now the Legg House will be removed from the Heritage Register inventory.

Just recycling materials is only a waste management solution and does not address the loss of older more affordable and sustainable housing, secondary suites, ground oriented dwellings, heritage and neighbourhood character. The objective should be full retention of these character houses and all city policies should align to make that happen in a way that is fair to existing owners and stakeholders. The proposed heritage action plan is a start, but needs more work.

Elizabeth Murphy is a private sector project manager and was formerly a property development officer for the City of Vancouver’s housing & properties department and for BC Housing.