Parks and recreation system under threat 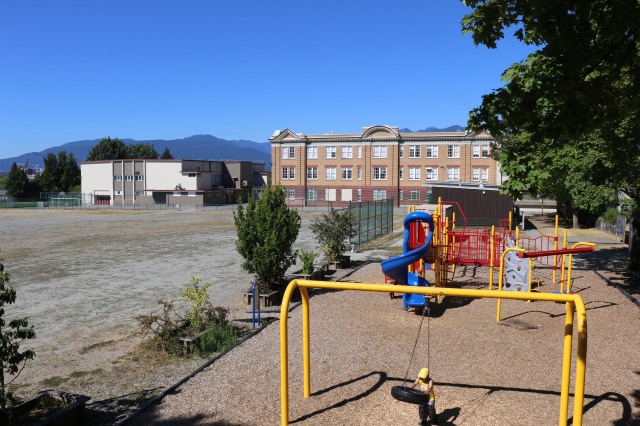 The manufactured consent coming out of the city and Park Board bureaucratic machines has intensified over the last month as they take aim at the parks and recreation systems.

Britannia Community Services Centre is being targeted for housing. Meanwhile, community centre associations are being forced into a new agreement many consider a shotgun marriage that undermines independent community involvement in programming in favour of centralized controls. The community centre associations and the independently elected Park Board stand in the way of the city’s access to these lands for a similar housing fate as now being considered for Britannia.

Vancouver’s parks and recreation system cannot solve the housing crisis. Opening up these large historic sites to housing will mean the public open spaces and amenities that make the city livable will be encroached upon just when increased density throughout the city puts more demand on their use. Many neighbourhoods are already underserved for parks and amenities. This would make it worse.

First, some background on Britannia. Located in Grandview near Commercial Dr., it is a large site that was put together in the 1970s under the Dave Barrett NDP government that recognized the community was drastically underserved for services.

They cleared the site of 77 expropriated houses that were demolished or relocated. The high school, elementary school, community centre, library, rink, pool, track, fields, courts, playgrounds, were all put on one large 17-acre site. It is a fabulous model of combined services.

Darlene Marzari, B.C.’s Minister of Municipal Affairs at the time Britannia was created, says: “Britannia should be protected to serve the community without further encumbrances of housing in an already complex management structure.”

To see where the future of city-wide facilities are going, all one has to do is look at what transpired at Britannia last week. The city held a housing forum with a presentation from the housing department’s Dan Garrison setting the context.

Garrison gave an account of the recently approved Grandview Community Plan. His version ignored most housing options that came out of the plan and presented it as if only Britannia and one small site on Hastings St. were identified for new affordable housing potential.

Ignored was the controversial Boffo Development tower at Commercial and Venables that includes housing for the Kettle Society. None of the apartment zoning that was added to or expanded counted either. Industrial land in the recent False Creek flats plans allows some affordable rentals, and could also extend past Clark Dr. up to beside Britannia, but is not an option either.

Only the Britannia site, apparently, is an option to solve the insatiable demand from the housing crisis.

So here we have it. The future use of our public community spaces — open parks and recreation areas are treated as empty lots waiting for housing development.

Some associations go back 70 years, with many also building the community centres, either in whole or in part. It was this potential trust interest in the facilities that landed the city in court when former city manager Penny Ballem tried to disband the CCAs in 2012.

This was an initial step toward a city takeover of the Park Board. Ballem transferred the Park Board facilities over to city management under the Real Estate and Facilities Department, where they remain today. Even the elected Park Board was also at risk of being dismissed. However, with Vision losing control of the Park Board in the last election, a new process was initiated with the CCAs. The question is how much has really changed.

Park Board Chair Michael Wiebe said: “We continue to want what’s best for our communities, which is something that most of us campaigned on. It’s the reason most of us are here and why we fought so hard to join the (joint operating agreement) process, during which time we tried to create a more transparent process that was built on respect. We all understand that the process wasn’t perfect yet we were to find solutions that could work.”

But this message doesn’t seem to be reflected at the Park Board meetings or getting through to how staff is implementing the process. An arbitrary deadline of Sept. 30 has been set for CCAs to sign this new joint operating agreement. Staff are wielding this date with threats of potential legal action as a weapon.

Recently, 12 of the 20 community centre associations sent a joint letter to the Park Board saying they are not comfortable signing the proposed joint operating agreement by the deadline. Only three have signed to date of writing. Yet staff are presenting a shotgun effort to force the execution of the proposed agreement.

The Kerrisdale Community Centre Society had a large meeting of 496 members of which 97 per cent voted to reject the proposed joint operating agreement. This is anything but a done deal. Most CCAs are opposed, still negotiating, or in the courts.

Forcing a false signing deadline when they are clearly not ready is no way to rebuild trust. Many CCAs are asking for an extension.

Donnie Rosa, director of recreation at the Park Board, sent messages to the associations saying the issue would be dealt with at the next Park Board meeting on Oct. 2. In fact, a report will not be considered or direction given until Oct. 23.

Wiebe said: “No actions will be taken on (joint operating agreements) until after the meeting and direction is given from the commissioners. I want to see us work toward a place of understanding on how to move the (agreements) forward.”

Contrary to statements by Rosa, the fact is that moving away from the 70 year collaborative relationship between the CCAs and the Park Board towards more centralized control, is not necessary to provide more city-wide access.

Most centres have already been doing this, first through the Flexipass in the 1990s that since folded into the One Card. Some CCAs , such as Mt. Pleasant, already offer subsidies for low income people. Most CCAs are fine with sharing some resources with those who need help and agree with the principle of providing access for everyone.

Hardball antics by staff or the board are not necessary nor helpful. Centralized control on Park Board land is mainly so the city can implement its shifting priorities.

An independent elected Park Board is very much tied to a strong community centre association system. Hopefully the Park Board will re-establish a collaborative community relationship based on trust, before it is too late.

All levels of government have contributed to creating the housing crisis and they are all responsible for turning it around. But our parks and recreation system is not real estate assets to be developed for housing. That is no solution. 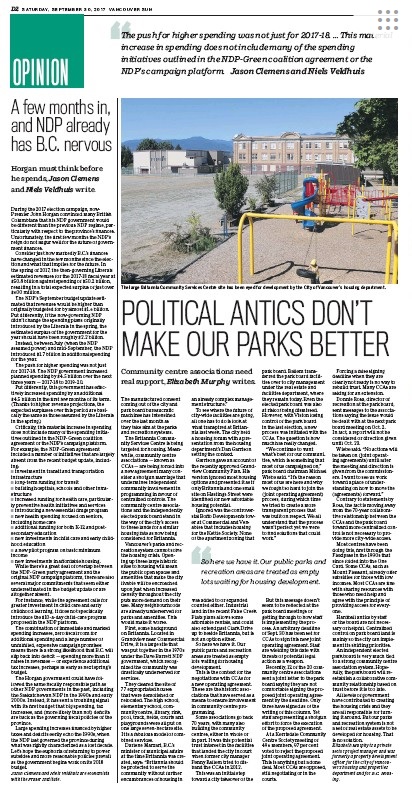