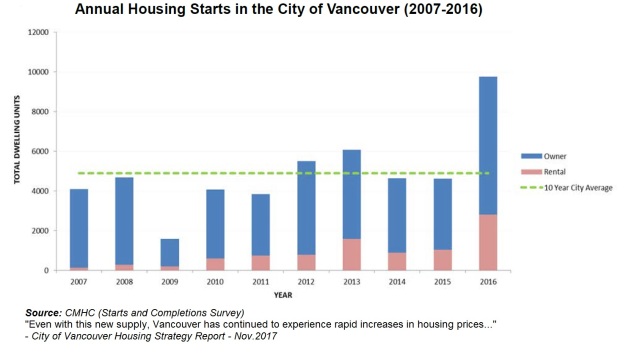 The City of Vancouver has an addiction. Like all addicts, the first step is to admit they have a problem. The city has finally taken that step.

The city’s addiction is to increasing density through rezoning that has been inflating land values. Along with large speculative inflows of capital that treats housing as a commodity rather than a home for people who live and work here, this has created an affordability crisis. It is positive that for the first time, the city has finally made this admission as part of the new housing strategy going to council this week.

Unfortunately, typical of an addict, the city’s solution to this problem is to increase the addictive substance. They claim that if they increase density and housing supply — this time, the right kind of supply — affordability will get better. This is unlikely for a number of reasons.

The city’s addiction is not like drugs or alcohol that one can stop all together if one chooses. It is more like an eating disorder in which one must learn how to eat healthily and in smaller quantities. In many ways this is much harder to achieve.

So the city may have taken the first step to recovery, but the plan is flawed. What the city needs is the civic equivalent to Overeaters Anonymous, such as Overbuilders Anonymous.

The problem for overbuilders is that they are stuck in the supply-side dogma that has proven to be a complete failure. This is promoted by the industry and special interests who benefit directly and up to now have also funded government election campaigns. Now that the province has banned corporate and union campaign donations this is about to change.

The supply-side dogma has been recently countered by Dr. John Rose, an instructor in the department of geography and environment at Kwantlen Polytechnic University.

He used data from the Statistics Canada censuses and the Demographia Survey House Price Data, and he also looked at supply in housing markets elsewhere in Canada, the United States and Australia for reference.

Dr. Rose went back to the 2001 census, covering a 15-year span where he found that for every 100 households that were added, Metro Vancouver added 119 net units of housing.

According to census data, there are 66,719 unoccupied dwellings in Metro Vancouver. Yet despite this huge overbuilding of housing supply, affordability has significantly worsened.

This is a trend that I and others have been writing about since 2007. It is not new, but has been escalating over the last few years to the point it is finally getting mainstream attention and affordability has become the main election issue at all levels of government.

Most of the demand-side issues are under the provincial and federal jurisdiction. The city has few tools to address this, and as proposed, the city’s plans will be of minor influence.

The area where the city does have influence is on the supply-side speculation created through increased density and rezoning. Although the city is attempting to incorporate some measures of affordability, it is unlikely that these will be effective.

It is impossible for the city to talk down market land values. We have evidence of this already in the Cambie Corridor where the city has attempted to take 75 per cent of the increase in land value from rezoning as development charges, yet speculative land inflation has flourished.

To negotiate affordability into market projects will result in large projects that will be out of scale with the surrounding communities. This precedent of larger scale, with or without affordability, will further inflate surrounding land values as speculators’ expectations rise.

The proposal to increase upzoning to allow new construction of townhouses, row houses, multiplexes and apartments in areas currently zoned for single detached homes will inflate land values since redevelopment and assemblies are encouraged. This will undermine the incentives for character house retention and ensure more unsustainable demolition.

Character house incentives and multiple conversion suites can provide more affordability over the vast 60,000 single-family-zoned properties, with much less inflationary impact, while providing more rentals, some ownership, and mortgage helpers. New construction townhouse and multiplex units are often just as expensive as a bungalow with a secondary-suite mortgage-helper.

These proposed upzonings are likely to undermine affordability rather than solve it. Yet allowing more secondary suite conversions rather than shutting down unauthorized ones is not a priority action of the proposed housing strategy.

The large scale upzoning is proposed to be city-wide rather than neighbourhood-based. This will undermine local context that was provided through CityPlan and past local area planning that gave direction as to how each neighbourhood could support future growth. Each neighbourhood is different and should be dealt with according to its unique character to protect the diversity of the neighbourhoods.

The city is also looking at a design competition for what appears to be a new “Vancouver Special” type of housing. They are looking for a multiplex that could be copied like a cookie-cutter on standard lots. This will result in massive amounts of demolition of the last remaining character houses and destroy streetscapes.

There are a whole list of proposed tax changes in the housing strategy that are out of civic jurisdiction. Some seem fair, but others could have unintended consequences that greatly impacts local owners.

Tying property tax surcharges to income tax reductions would mean that only those with high net income can afford to live in homes that they may have owned for many years. Not all owners of expensive homes have high incomes, often for legitimate reasons. The city is even proposing to limit the current property tax deferral program. It seems heavy handed, and people could be taxed out of their homes.

Generally, many of the city’s proposals are for things that are out of its own jurisdiction, or supply-side increases of overbuilding that will not work to make things affordable since they increase land inflation. We know that Vancouver already has more existing zoned capacity than is required for decades of future growth.

So the time has come for Vancouver to address its overbuilding addiction by moving away from supply-side dogma. We need a new way to plan for a truly sustainable future that benefits the people who live and work in the city.