The Costs of Corridors

OPINION: Each neighbourhood is distinct and different in how they have evolved over time so need to be planned in that kind of context 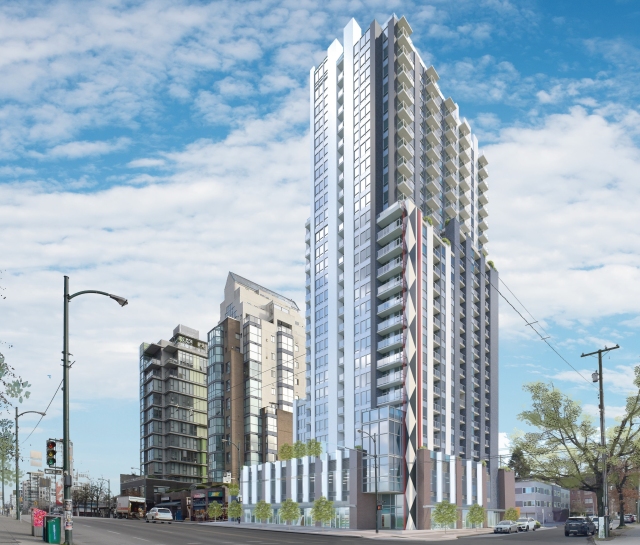 Vancouver was established on a grid pattern of arterials for streetcars (replaced by trolley buses) to serve separate and distinct neighbourhoods across the city. Each neighbourhood was designed to be walkable and transit oriented, with a commercial street, schools and parks.

But current planning directions are undermining these historic patters by massive land-use corridors like the Cambie corridor and now the Broadway corridor. It is an enormous mistake at a high public cost.

The Broadway corridor land-use planning is now underway in anticipation of a subway from VCC-Clark Millennium Line station to Arbutus and Broadway, even though it could be a decade away from completion. The boundaries for land-use planning are Clark Drive to Vine Street, and 16th Avenue to 1st Avenue. It crosses multiple neighbourhoods that are broken up into sub-areas, that do not fully follow historic neighbourhood boundaries.

For example, the neighbourhood of South Granville, with its many heritage rental apartment blocks, goes from Burrard Street to Oak Street but is not defined as a sub-area of the corridor. It instead is split between Kitsilano and Fairview South.

The city recently had walking tours as part of the Broadway corridor planning process. On a tour of the sub-area they call Kitsilano South (that includes South Granville to Granville Street), the planning staff who guided it were very nice young planners but were mostly not from here and did not understand the historical context of neighbourhood boundaries. Clearly institutional memory is being lost due to senior staff turnover.

The planners did not understand why it was important to distinguish Burrard Street as the boundary of Kitsilano that divides between the RT duplex zoning in Kitsilano and RM apartment zoning in South Granville.

Why this matters is that these neighbourhoods are distinct and different in how they have evolved over time so need to be planned in that kind of context. This is what the city-wide plan is supposed to do, however, large portions of the city are being taken out of that process and instead planned as part of a corridor.

The city-wide plan is looking like it will just be an implementation of the former Vision council’s policies and programs at a cost of $20 million. It will not be determining what the people who live and work here want for their neighbourhood like the previous CityPlan program. Quite the opposite.

If a subway is extended to UBC, the Broadway corridor is proposed to include all of Kitsilano and West Point Grey as well. Staff are redefining corridor planning as being neighbourhood-based when that is not the case.

Each neighbourhood should be able to have its own land-use planning response to transit. Instead, the tail is wagging the dog as transit is dictating a land-use typology regardless of neighbourhood context.

Planning for the future needs to start with what exists now and who lives and works in the city. Displacement should be avoided as much as possible since the older more affordable housing will be demolished and replaced with more expensive new construction of both rental or strata. Displacement has the domino effect of the most vulnerable people being put at risk of homelessness.

So planning must be done very carefully to ensure it is appropriate and in context to provide for incremental growth. If we are managing growth appropriately, we should not have to be in chronic crisis mode. The current housing crisis is the result of over a decade of mismanagement. It doesn’t have to be this way.

A long-standing policy to protect existing rentals through a one for one replacement requirement has been in place in most apartment RM zones. But repeated efforts to extend this policy to commercial C2 zones has been squashed.

When the Swanson motion was at council, Mayor Kennedy Stewart said the city is working with their developer “partners” on building rentals, similar to how former mayor Gregor Robertson used to frame it. Then Stewart called the vote without allowing consideration of amendments, so the motion to include C2 zones failed. It was a déjà vu moment.

Stewart seems to be following in Robertson’s footsteps. Stewart has had a series of 10 meetings with former councillor Raymond Louie and the major developers for whom he is advocating. These include Ian Gillespie of Westbank Projects Corp., Bruno and Peter Wall of Wall Financial Corporation and Brian McCauley of Concert Properties. He also had lunch with Bob Rennie and met with Ryan Beedie of Beedie Development Group.

The city budget is becoming increasingly dependent on development fees such as community amenity contributions (CACs) and development cost levies (DCLs). This makes the city’s addiction to development insatiable. Rental projects that waive development fees will not fill this need.

However, the rental programs inflate market rental rates while the projects are being used to set precedents of scale for condo towers to follow that will provide CACs and DCLs.

As part of a rental pilot program set up by the previous Vision council, there are 20 projects coming forward that greatly increase height and density. One example is the project at Broadway and Birch Street at the old Denny’s site.

Since this is in the heart of Central Broadway, a 16-storey tower was previously approved. Under the rental pilot it is now proposed to go to 28 storeys and a floor space ratio of 10.52. Of the 248 secured rental units, only 53 will have moderately priced rents while the balance will be market rent units.

Another example is at developer Wesgroup’s site at Broadway and Alma Street. An application was originally submitted for a six storey market rental project a few years ago, and now is coming back with a new proposal under the pilot project for 14 storeys and 5.8 floor space ratio, setting a new precedent for the surrounding area of Kitsilano and West Point Grey that currently is mostly under four storeys. It has staggered floors and is orange in colour that couldn’t be more obtrusive.

These kinds of blockbusting projects are just the start, especially where corridor planning is implemented without neighbourhood context. It will fuel speculation and expectations that will increasingly displace local people. The Broadway corridor, especially if extended to UBC, contains a huge amount of the city’s most affordable existing rental stock and older condos. Many people will be displaced if this corridor planning program continues.

The city already has an enormous amount of zoned capacity, even when only counting the sites most likely to be developed or already in the pipeline, and is enough to meet actual growth projections well past 2040. The city is targeting 72,000 units from 2017 to 2027, yet based on census data it only justifies 26,000 units. So the city sets unrealistic growth targets by almost three time as much.

Neighbourhood-based planning that manages growth city-wide is the way to avoid these problems of crisis management that only makes things worse. The city can press pause to establish a new direction rather than implementing the previous Vision council’s agenda. 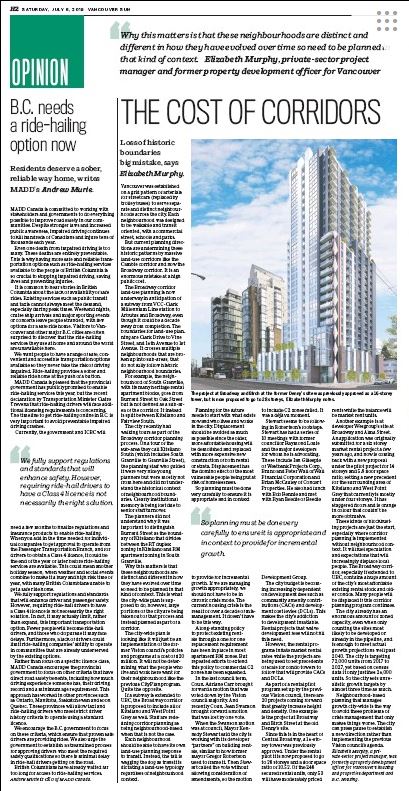 1 Response to Neighbourhoods vs. Corridors